Transformers: Revenge of the Fallen

Transformers: Revenge of the Fallen (simply known as Transformers 2), is a 2009 American science fiction action film directed by Michael Bay and executive produced by Steven Spielberg. It is a sequel to 2007's Transformers and the second installment in the live-action Transformers series taking place two years after Transformers. The plot revolves around Sam Witwicky, who is caught in the war between two factions of alien robots, the Autobots and the Decepticons. Sam is having strange visions of Cybertronian symbols, and being hunted by the Decepticons under the orders of an ancient Decepticon named The Fallen, who seeks to get revenge on Earth by finding and activating a machine that would provide the Decepticons with an energon source, destroying the sun and all life on Earth in the process. This is the first film to feature the largest cast and Transformers, including the Constructicons for the first time in the series. Returning Transformers includes Optimus Prime, Bumblebee, Ironhide, Ratchet, Megatron, Starscream and Scorponok.

In 17,000 B.C., the Seven Primes traveled the galaxy to create Energon with star-absorbing machines called Sun Harvesters. The Primes followed a rule in which to never destroy planets with life, but one of them, later called The Fallen, deceives the others by building an army and sets up a Harvester on Earth. After defeating ancient humans, the Primes defeat and imprison the Fallen before he can harvest the Earth's sun with the Matrix of Leadership. The rest of the Primes sacrifice themselves to hide the Matrix.

Two years after Megatron's destruction, the Autobots have joined the U.S. military to form the Non-Biological Extraterrestrial Species Treaty (NEST), an elite, classified task force to hunt down Decepticon resistance, led by William Lennox and Rob Epps. During a mission in Shanghai and after a battle against two Decepticons, Optimus Prime learns of The Fallen's return, but is unfamiliar with the name. National Security Advisor Theodore Galloway chastises the task force for their destructive tactics and reminds them that Megatron's corpse is still in the Laurentian Abyss, and that the surviving Allspark shard is locked away. Soundwave, the Decepticons' Communications Officer, hacks into a U.S. military satellite, eavesdrops on the conversation and sends Ravage to retrieve the shard from NEST's headquarters.

Meanwhile, Sam Witwicky prepares to attend college, leaving his girlfriend Mikaela Banes and guardian Bumblebee behind. While preparing for college he gets a call from his girlfriend, Mikaela, and promises to give her some mementos from their first adventure with the Autobots. While on the phone, he removes an old jacket from his cupboard and another small Allspark shard falls from within it. He picks it up and it channels its knowledge into his mind, causing him to see Cybertronian symbols and bringing the kitchen appliances to life. After Bumblebee destroys them, Sam gives the shard to Mikaela, who later captures the Decepticon Wheelie when he tries to steal it. The Decepticons resurrect Megatron by using the shard retrieved by Ravage and killing one of their own allies to provide parts for him; Megatron then flies to a moon of Saturn and reunites with his master, The Fallen. The Fallen orders Megatron to capture Sam alive and kill Optimus, who is the last of the Primes and the only Transformer who can defeat him.

Sam, Mikaela, and Leo (Sam's college roommate) are targeted by the Decepticons. Alice, a Pretender Decepticon, first attempts to seduce Sam and then tries to attack him, but Mikaela and Leo enter the room and help him escape. They kill Alice, but are captured by Megatron, who says that the symbols in Sam's mind will lead the Deceptions to a new Energon source. Megatron orders Scalpel to remove Sam's brain, but Optimus and Bumblebee arrive to rescue the humans. Optimus engages Megatron, Starscream and Grindor into a vicious fight in a nearby forest; he is losing badly at first, but eventually overpowers Megatron, defeats Starscream and kills Grindor. As Optimus attempts to find Sam, Megatron mortally stabs him. After The Fallen learns of his fall and after Optimus encourages Sam to run, Optimus dies. This forces Sam and his friends to retreat while the Autobots repel Megatron and Starscream.

The Decepticons prepare for the Fallen's arrival. After landing on Earth, the Fallen hijacks Earth's telecommunications systems and asks for Sam in return for mankind's survival, making Sam an international fugitive. Sam enlists the help of former Sector 7 Agent Seymour Simmons, who reveals that the Transformers visited Earth eons ago and the most ancient, known as Seekers, live in secret. With help from Wheelie, they track down an elderly Decepticon named Jetfire, who explains the Fallen's history. He and Wheelie rebel against the Decepticons, and Jetfire teleports the group to Egypt to find the Tomb of the Primes and the Matrix in order to revive Optimus. Simmons contacts Lennox and Epps at NEST, telling them to bring Optimus and the other Autobots to Egypt.

Sam's group finds the tomb hidden in Petra, but the Matrix disintegrates into dust in Sam's hands. Undeterred, Sam places the Matrix's remains in his sock. NEST and the Autobots land, but they are attacked by a large force of Decepticons. Meanwhile, a massive Decepticon called Devastator demolishes one of the Pyramids of Giza, revealing that the Sun Harvester was hidden inside. Lennox and Epps call in an airstrike, which kills most of the Decepticon forces; however, Megatron manages to shoot Sam, seemingly killing him. Sam has a vision and meets the Seven Primes, who tell him the Matrix is earned, and that he has earned the right to bear it. They revive Sam and restore the Matrix, which Sam then uses to revive Optimus.

The Fallen arrives and steals the Matrix, before using it to activate the Sun Harvester. A wounded Jetfire (who was injured by Scorponok) sacrifices himself in order for Optimus to gain new powers. Jetfire's body parts are transplanted onto Optimus, powering him up and giving him the ability to fly. Optimus knocks The Fallen and Megatron off the pyramid and destroys the Sun Harvester. Optimus engages The Fallen in a fight and gets the upper hand until Megatron interferes, though Optimus easily defeats Megatron and cripples him. The Fallen fights Optimus again and starts to tear his new armour apart, but Optimus overpowers him. Wounded, The Fallen attempts to escape, but Optimus rips his spark out of his chest, killing him, while an injured Megatron watches in horror. After agreeing to a suggestion to retreat, Megatron (who is now the leader of the Decepticons once more) vows revenge and retreats with Starscream. The Autobots and their allies then board to a U.S. Navy aircraft carrier to return to the United States as Optimus sends a message of his own. 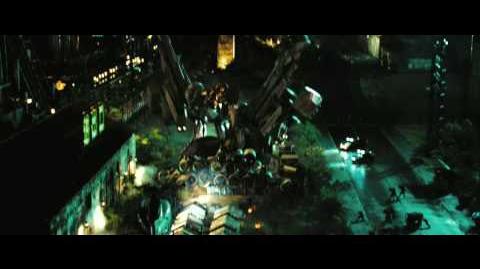 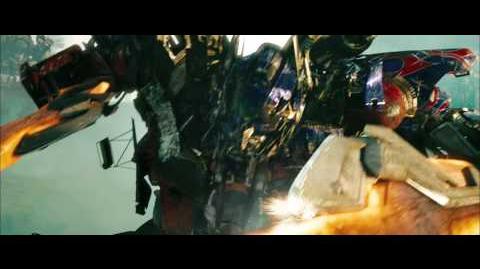 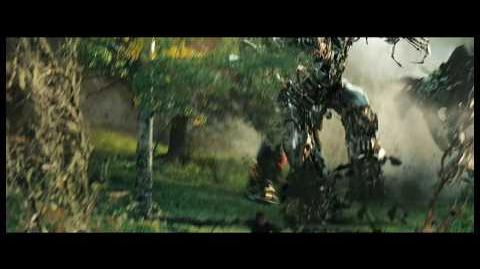 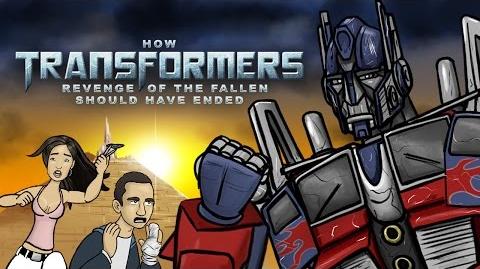 How Transformers Revenge of the Fallen Should Have Ended
Add a photo to this gallery
Retrieved from "https://heroes-of-the-characters.fandom.com/wiki/Transformers:_Revenge_of_the_Fallen_(2009)?oldid=16292"
Community content is available under CC-BY-SA unless otherwise noted.