Rapunzel Corona is the one of The Big Four, originally from Tangled. She is the long-lost princess of Corona who spent her life trapped in a tower by her abductor, Mother Gothel.

Rapunzel is desperate to go see the floating lights that appear in the sky every year on her birthday, but Gothel is determined to keep her locked away because of her healing powers. After meeting a runaway bandit named Flynn Rider, Rapunzel coaxes him into taking her to see the floating lights, and the two embark on a journey that will change both of their lives forever.

Rapunzel is a beautiful young woman with big green eyes, freckles, fair skin, and a playful smile. She has an extremely slender figure that is smaller than Merida's robust build, befitting Rapunzel's role as the more "ladylike" of the two girls. She has golden blonde hair at an incredible length of seventy feet. Most of the time, her long tresses are worn down and drag on the ground behind, but after arriving at the kingdom of Corona, she meets five young girls who braid her hair and intertwine it with flowers, shortening it to brush her ankles. Like Jack Frost, she spends the entire movie barefoot. Rapunzel wears a dress that consists of a corset top, lavender in color and laced with a pink ribbon. The skirt is darker shade of purple, but still bright and decorated with swirl designs, in pink, dark purple and white. She also wears a white petticoat underneath. Her sleeves, at the top, are puffed and striped, pink and lavender, and the rest, is a pale, baby pink, with white lace at the end. When her hair is cut to a pixie-style at the end of the movie, it becomes brown and somewhat spikey.

More than anything else, Rapunzel is kind. In the Snuggly Duckling scene, she was at first intimidated by its customers' tough, grotesque appearances, but when they began to reveal their dreams, she had no trouble seeing past their outward appearances to accept them for who they are inside. She is quite outgoing and charming, though eighteen years isolated in a tower have resulted in her being somewhat naive and oblivious. But don't be mistaken, Rapunzel isn't afraid to stand up for herself and others. Rapunzel is very compassionate and always puts others before herself, which is shown when she is willing to risk her own life to heal Flynn and even reached out for Gothel when she fell out the tower to her death. Even though she displayed paranoia shortly after leaving the tower for the first time (seeing a rustling bush and immediately thinking it was ruffians or thugs), she quickly adapted to the outside world. The only thing she is seemingly afraid of is damage to her hair and the loss of its magic.

Rapunzel has approximately 70 feet of hair that can be used to grab things and swing on if in danger.

Supposedly channeling the energy from the sun, Rapunzel's hair could reverse damages done to humans including a complete regeneration of damaged tissues and organs as well as reverse aging to a certain degree. The subject must physically be in contact with the hair in order for the magic to work when the special song begins; her hair also emits a glowing light when the magic activates.

Bring back what once was mine

Heal what has been hurt

Save what has been lost

Bring back what once was mine

What once was mine

Rapunzel's hair also possesses a limited prehensile ability: grappling and grabbing objects that easily outweigh herself without straining or hurting in any way. She revealed that her hair would turn brown should it be cut, and such an act also warrants immediate loss of magic.

Rapunzel also has superhuman strength to a lesser degree; swinging from one cliff to another and suspending herself in the air using leverage of her hair as well as hoisting Gothel up into the tower day after day, to her amazement. Additionally, her hair appeared almost weightless whenever she carried it; needless to say, a normal person cannot, by any means, perform any of the stunts done by Rapunzel with this much hair. Considering the extraordinary amount of hair, she had shown a great deal of agility and dexterity with her hair, such as climbing to high altitudes, jumping off such without much effort, and running just as fast as Flynn, who was a professional thief and does not possess the same amount of hair as Rapunzel did. 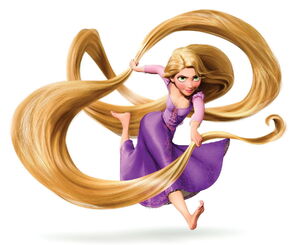 Rapunzel has shown high adaptability; she took roughly two seconds to adjust to the environment of the world. Additionally, she was once trapped in an underwater cave and seemingly was able to swim, which is humanly impossible because she was never taught to. It is observed that her power could still be channeled through her tears even after her hair has seemingly completely lost the magic. It may be that the actual source of energy is in her heart, and as such will only activate and supply when love is involved. However, another interpretation is that channeling her power through her tears was actually releasing the drop of sunlight that created the magical flower which gave Rapunzel her powers. Viewed in this light, such an effort was a once-off ability.

Although incredibly naive, in her own way Rapunzel is quite intelligent. Having being locked in a tower her whole life, the only entertainment she had was intellectual and artistic. She is an avid reader, having taught herself skills like cooking, baking from books. Her quick thinking helps get her and Flynn out of a number of situations, though her naivety can sometimes cloud her judgment. She is an excellent artist, and is shown to be filling her tower with wall to wall murals, as well as the floor and ceiling, including a fully accurate astronomical map. Rapunzel is also seen as a very hard worker as shown in "When Will My Life Begin" and always finishes all her chores before her mother arrives to the tower.

Though the least prevalent in weaponry (next to Hiccup), Rapunzel has been shown to hold her own, using her hair as a whip and a method of healing if injured. She's also shown to use her frying pan to incredibly effective use.

Rapunzel is the sweetheart of the group and has her friend's backs no matter what. Because she is shown to have her long blonde hair with all magical abilities intact in most fanfiction and fanart, she has the power to heal her friends if they ever were to get hurt, making her a valuable asset to the group. In many fan works. She is the healer and emotional support of the group.

Retrieved from "https://heroes-of-the-characters.fandom.com/wiki/Rapunzel_Corona?oldid=18487"
Community content is available under CC-BY-SA unless otherwise noted.