“The cold never bothered me anyway.”
―Elsa, the Snow Queen

Queen Elsa is the deuteragonist of the Disney film Frozen and the main protagonist its sequel Frozen II. She is the current queen of Arendelle and the older sister of Princess Anna. Born with mysterious power that allow her to create and control ice, Elsa once left her kingdom completely frozen over by mistake, until she learned to control her power through love. As of the second film, she is no longer Queen of Arendelle (having passed that title to Anna), and is currently the Fifth Elemental Spirit of the Enchanted Forest.

Elsa has a tall and queenly figure, with platinum-blonde hair and icy blue eyes. She has a beautiful, heart-shaped face and small pointed nose, like her younger sister Anna. Her skin is pale, with a few faint freckles across her nose and cheeks. On her coronation day, she wears her hair braided and tucked into a bun, but she lets it down into a long French braid when she leaves Arendelle. The original creators of Frozen claimed that if she did not have ice powers, her hair would be dark brown like her mother's.

She wears two dresses in her film, Frozen. Her coronation dress is blue with black sleeves, accompanied with her blue gloves and purple cape. When she leaves Arendelle, she creates a blue dress for herself with a frosty cape.

In Frozen Fever, she uses her magic and a pot of nearby sunflowers to alter her ice dress into a more spring-time outfit, tinting the dress green with green leaves, pink flowers bonded into her cape and flowers woven in her braid instead of snowflakes.

Elsa's personality contrasts with Anna, her sister, in some ways. In the film, Elsa demonstrates to be more of the quiet, calm, introverted-type compared to her sister. She also shows a more passive nature than her sister. It was Anna who always pushed Elsa to use her powers, and led her around by the hand when they played together, showing that Anna was more the leader despite being younger.

However, from the belief that staying away from the people she love will keep them safe, Elsa is more sensitive. She believes she is destructive, and longs to be accepted. Unlike Anna, she will not confront her problems, which leads her to believe she can only create winter, not stop it.

Alone in her ice castle in the film, Elsa develops a more free-spirited personality.

Despite these other traits, or due to them, Elsa has a great sense of responsibility, being raised as the next in line for the throne. She feels responsible for hurting Anna, and felt it was her responsibility to always hold herself back and stay sealed away for the good of not only her sister, but for everyone who would be in danger from her powers.

In another contrast from her sister (possibly because of her powers) Elsa has shown a somewhat timid, fearful personality that panics easily. Through various points in the film she was shown to run from problems when they became too much for her to deal with, such as confronting her sister at the ball, dealing with the shock of the people when her powers were exposed, confronting Anna again at her ice palace and fleeing deeper into her castle when Hans and the Duke's henchmen came for her.

In "A Sister More Like Me" and in the movie, it is hinted that Elsa is extremely intelligent and scholarly, reading and studying in her room most of the time when she was young, with a particular love for geometry, a love she put into effect when building her ice palace, which contrasts with Anna's more outdoorsy nature.

In Frozen Fever, we see a more reckless side of Elsa, as she goes to great lengths to give Anna a spectacular birthday despite being in poor health, lavishing her with various over-the-top gifts and ceremony as she slowly loses her composure.

Elsa was born with magical control over ice and snow, otherwise known as cryokinesis. She can create snowflakes and blizzards. If she hits someone directly with her powers, she freezes them. If she hits their heart, their hair will slowly turn white as they gradually freeze to death. She created herself an ice castle on the North Mountain, effortlessly forming crystals into steps, towers, and a snowflake chandelier. Her powers can be channeled through her skin anywhere on her body; even through clothing. Fabric may, however, slightly lessen the amount of ice or snow she produces. Her power, in turn, is largely influenced by her emotions, strengthening if she is feeling sad, angry, panicked, happy, free, loving or anything else. In the film, negative emotions are shown to cause her to lose control, perhaps as a form of instinctive self-defense.

Her powers, formidable as they are, sometimes get away from her. On her Coronation Day, she is frightened by Anna removing her protective glove during an argument and accidentally freezes the entire fjord, trapping the kingdom of Arendelle in an eternal winter. She accidentally froze Anna twice; once when they were young, and once when Anna tried to get her to defrost their kingdom.

She is also seemingly completely immune to the effects of the cold (though she is still prone to getting colds and other illnesses). This is shown by her living comfortably in an ice castle on top of a freezing mountain, and wearing a filmy off the shoulder gown made out of frost and ice, one of her quotable lines being "the cold never bothered me anyway." Perhaps the best exhibition of her powers is when she fled from Arendelle after accidentally revealing her powers and, although she does not know it yet, frozen over the fjord and cast an eternal winter over her kingdom. In the song she shows her ability to create snowflakes of alternating sizes, create flurries in magnificent swirls, create living snowmen, and build virtually anything out of ice (her castle and the staircase leading up to it, which Kristoff later remarks is "flawless"). Her powers do not seem to possess any sort of limits, making Elsa a formidable force of nature and one of the most powerful characters in the fandom.

In Frozen Fever, it is shown that she has mastered more capabilities in her magic, using it to incorporate sunflowers from a nearby pot to update both her dress as well as Anna's. The short film also shows that while Elsa is immune to cold and winter sickness she is not immune to "summer colds" getting sick during Anna's birthday. This shows that when sick she creates snowmen unentionally when she sneezes.

Much like Anna, Elsa's role in the fandom differs between story to story, both considered honorary members of the Big Four (or the Super Six). In Frozen Tangled Guardians, she is the oldest of Jack and Rapunzel's daughters. 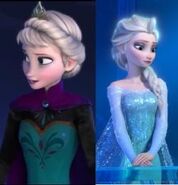 Elsa in her normal royal attire (left), and in her "Snow Queen" dress (right)

Elsa's frustration manifesting in her castle.
Add a photo to this gallery
Retrieved from "https://heroes-of-the-characters.fandom.com/wiki/Queen_Elsa?oldid=18466"
Community content is available under CC-BY-SA unless otherwise noted.